So Where Were You? 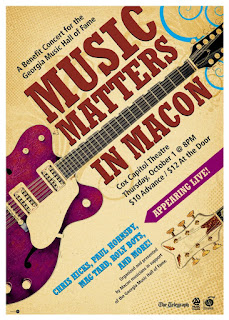 Saying Mom is busy has been an over-used understatement. It's more like life's been a hurricane, and she's doing her best to ride out the storm. This week, she will reveal her calendar that has been keeping her crazy busy, but until then, here are some of the events of this past week that has her feeling like a reporter from the front lines of that hurricane, when most folks have evacuated.
This week, Mom attended her monthly Leadership Macon class. This one focused on tourism and the offerings of her beloved hometown. One of the most shocking things she learned that day were there were people in her class who have never stepped foot in the Cox Capitol Theatre. Or the CVB's Downtown Welcome Center. Or the Georgia Music Hall of Fame.
And even though Mom was worn out from a full day of class and the work load of the week, her conscious was still obligated to attend the Music Matters benefit concert for the Georgia Music Hall of Fame, held at the Cox Capitol Theatre that Thursday night. The benefit live music showcase, put together by local Macon musicians featuring local Macon music acts Mag Tard, Roly-Bots and Chris Hicks, was the kick-off to additional concerts that will raise funds for the endangered Macon-based, state-funded institution. So where were you?
Once again, Macon's vibrant live music scene played to too many empty seats. Once again, the same people showed up, who support everything else. Once again, it was not enough. But once again, a hell of a show was still put on . . . and most of Macon missed out on it.
Major props to Dan Zook, Tom Ellington and all the good folks and creative talent that put their time into the show. Mom and Shuga made sure to pay top dollar (all $12 of it) to show their support (by the way, totally against guest lists at benefits), and she hopes other Macon music lovers showed their support by doing the same.
The next night was First Friday, and once again, Mom went straight from the duties of the day, heels and all, directly to the sidewalks of downtown to enjoy an evening of lively downtown community. At one point, she was stopped dead in her tracks by a young professional who claimed she was joking about going to First Friday at her [downtown, nonetheless] office because she had never been to one and didn't know "what it was she was supposed to do." Well, Mom didn't know if she wanted to slap the chick's forehead or hug her with pity, but instead she decided to "bless her heart" for what she didn't know and hopes she gave First Friday a good chance to show her a good time. And although folks filled the street and downtown was alive and well, Mom still wants to know, where were you?
Where were the folks from her Leadership Macon class who haven't set foot inside the Capitol? Where are the folks from the "north" side of town who haven't given First Friday a chance? Where were the hoards of college students? Where are those who say there is nothing to do in this town? Where are all the crabby online commentators who see our city for what it's not worth?
If you're not in the game, you don't have a right to complain. So, next time you the folks from Candy's Land, let us know that you are indeed here and having a good time alongside us.
Posted by Jessica W at 12:34 PM