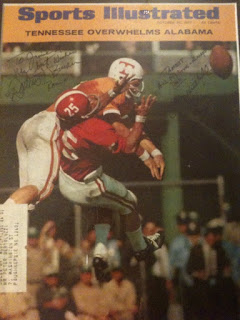 The Lord allowed me to drink some more. He said what I am searchin for are the answers to all which are in front of me. The ultimate truth started to get blurry. For some strange reason it had to be. It was all a dream about Tennessee . . .

Okay, so Mom is a little clueless about football. In fact, it takes a patient man to watch any sporting event with her. But Mom is a little excited about Saturday. Not only is downtown Macon getting in on the game day action, but she actually knows which color to cheer for!

That's Shuga D's dad Mr. Jimmy on the cover of Sports Illustrated, October 30, 1967. The Dalton, Georgia high school football hero went on to play for UT, where he was named an All-American Defensive Back and still hangs in their hall of fame today. He later went on to play a little pro for the Atlanta Falcons (and believe it or not, I actually have my own Falcon sweatshirt that once belonged to my guard-dog angel, the late El Guapo).

So, even though Mom will be doing repairs on the Macon Little League ballpark as part of her Leadership Macon class project, Shuga will be seen smiling, bright and orange, at downtown Macon's Rally in the Alley. Tailgate starts at 10:30 a.m. in Mulberry Lane Alley. There will be live entertainment, games like Cornhole, giveaways, food, a beer truck, children's inflatables, a cool photo booth, souvenir mugs and of course, a big screen.

Just remember, you Bulldogs better be nice -- or you'll have to answer to me . . . grrr.

And I am still thirsty,