Getting on a Soapbox

If I could howl it from the rooftops, I would. This evening was awesome.

Thanks, once again, to the College Hill Cooridor Commission (http://www.collegehillcorridor.com/) fo 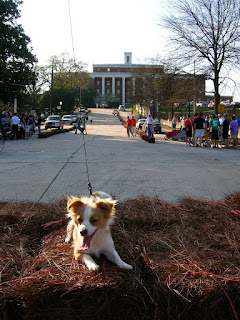 r putting on another outstanding event that shows us that we can - and do - have a cool community.

In conjunction with the CHCC's Bike Week, today's event was the Soap Box Derby. The masses met on Magnolia Street, filling Washington Park with college students and townies alike. Before you could say faster than the feet of Fred Flinstone, the infamous Magnolia Street hill was lined with pinestraw bales, and the soap box competitors were revving their perpetual engines.

Check out me on the Cherry Bomb. That's who got my attention. After a flawless test run, the team switch riders and loaded their heavy hitter. First out of the gates to make the timed treck, the rider tried to rein her in before hitting the bale barrier. Instead, summersaults insued, and the finish line arrived in the 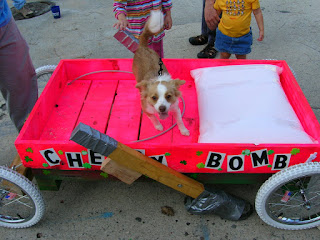 back of an ambulance. Fortunately, he still managed to net just over 30 mph and only suffered two injured fingers - one broken, one dislocated.
So even though the race got off to a rough start, the entire event was most definitely not a wreck. The back-up ambulance arrived, CHCC's sundress-adorned Sarah Gerwig-Moore re-adjusted the misconstrued pinestraw, and the checkered flag waved again!
My daredevil moment was staring down a a mixed-mutt six times my size. But the remainder of the evening was life in the slow lane . . . me, Mom and Shuga D, eating the free Nu-Ways, sharing a blanket and listening to the live music provided by the swell Red Swill and the newly formed Roly-Bots (dynamo, indeed). The weather was perfect, the event was free and people took part. Quit standing on the sidelines . . . get on your soapbox and go.
Posted by Jessica W at 9:18 PM