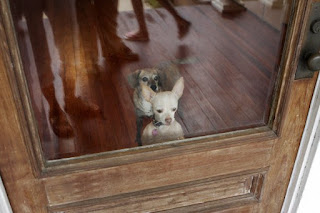 Grieve not, nor speak of me with tears, but laugh and talk of me as if I were beside you . . . I loved you so. 'Twas Heaven here with you.
- Isla Paschal Richardson

There is a story behind how I came to be known as Candy Lou and live with Mom, Shuga D and my brother and sister mutts in Candy's Land. It's a sad story, but one that continues to heal with time.

One year ago on this day, Mom experienced the worst day of her life when she received a phone call that her beloved Chihuahua of nine years had been hit by a car and killed on Vineville Avenue. His name was El Guapo, and anyone who knew him knew what a character he was . . . and how much Mom loved him.

Mom never knew such grief upon losing her small soulmate, but where there is pain, there was light . . . and that light was her friends and family. It was amazing the outpouring of sympathy she received. Most people don't see the loss of a pet as a priority in life's tragedies. But Mom's circle surrounded her, held her tightly and went above and beyond for her tears. She will never forget the care and compassion she was shown. Between the grace shown by Macon's Hart's Petuary to the cards, notes, flowers, oil painting and poems, to the Furry Angel memorial candle that arrived in the mail with the above quote on it, Mom's broken heart swelled with love. Within days, she found herself joined by friends and family at a local Mexican restaurant, toasting the "tan potato" known as Guapo with margaritas, laughs and assurance that life would indeed go on.

Two weeks later, I found myself in Mom's arms as she signed the adoption papers with Heart of Georgia Humane Society. If you had told Mom then that she would love another dog as much as she loved her Guapo, she wouldn't have thought it was possible. But here we are, one year later, and Mom looks at me with a love in her eyes that radiates just as strong from the same heart.

Even though the pain will never leave her, it doesn't hurt so bad. This Thanksgiving, she and her little brother Preston laughed as they swapped Guapo stories and stroked my fur softly as they remembered. And tonight, she and Shuga D will light the remainder of his memory candle, decorate the tree as they did last year and toast the little dog with a big personality who brought us all together.

Pictured is Guapo and Miss Kitty, taken by Mom's friend Honey Shot (Leah Yetter). It was his last picture . . . looking out the window at Mom surrounded by her girlfriends. You can visit my guard-dog angel Guapo's obituary here. (entry 72)
Posted by Jessica W at 5:02 PM