Sweet Soul Music for the Soul 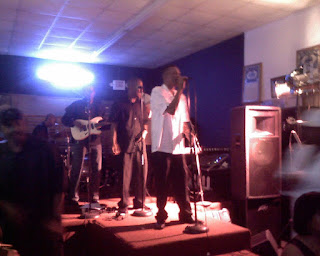 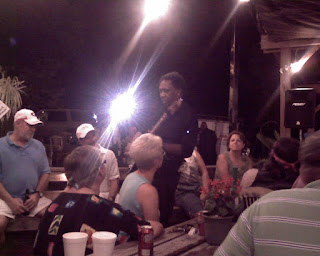 It was a weekend of singing along with unsung music heroes here in Candy’s Land. First up was Friday night at Chuck Howard’s newly opened Midtown Key Club, a.k.a. “Jazzplex II.” The house was packed with birthday celebrations, among them bartender Leroy who is still serving drinks with style (even though he’s partly retired). And Macon’s own Bo Ponder was also turning a number that night, doing what he does best – singing with earnest soul and bringing the house down with the crowd to their feet.

Arthur “Bo” Ponder is truly a Macon music treasure. He was there during the days of Otis, doing the same thing that brought the Big O fame. When Bo Ponder and Friends cover some of the favorites, they bring with them more original soul in their pinkies than what their contemporaries know what to do with today.

Other highlights of the evening include a hug, kiss and “How Sweet it Is” from another music hero with a sweet spot in Mom’s heart, Macon’s very own Satellite Papa. Satellite said he is craving fresh fish (never eats it frozen or store-bought), so he and Shuga D are making plans to cast their lines soon.

Another Key Club highlight . . . complimentary Miller Lites for Mom and Shuga from Councilman James Timley, who proved that even though he opposed Bragg Jam’s open container, he’s not opposed to sharing a toast to live Macon music.

Shuga D gets a serious gold star for Saturday. He and his childhood friend (and artist extraordinaire) Charles Ladson journeyed deep into the woods of the Walden compound in Bolingbroke to help Mom’s pop with some seriously needed storage shed cleaning. They made a good time of it, jamming out to tunes that are some of the reason there was so much junk in the storage shed to begin with! Five hours of serious manual labor later, Shuga and Charles returned home filthy and exhausted, but had done a good deed for the day that will be forever appreciated.

He didn’t have much time to rest before he and Mom were dressed up and out the door for the Taste of Music fundraiser for Macon Arts. They stayed long enough to taste, meet, greet and score some pretty awesome auction items – pet sitting, Tarot card reading, energy healing and lake living, all for a good cause.

Then they made their way from downtown to dockside at the Fish n’ Pig, just in time to catch some serious heart and soul playing loud and proud at the Georgia Legacy Foundation-sponsored birthday for Newt Collier. Mom took her seat at a picnic table and marveled at the good tunes and in-tune audience. Black and white. Young and old. Soulsters and soul-searchers. This is what a true music scene is made of. By the way, shout out to Mom’s surprise of the night – a visit to Macon by old friend, former co-worker and fun/mischief co-hort, Mixmaster P.B.!

All in all, it was a weekend of appreciating the soul legends among us. As Newt likes to say, “Those who played but never got paid.” Whether they ever made the radio airwaves doesn’t make a difference. When it comes down to it, they set the stage for music today. And continue to prove time and time again that they still own the stage when they take it today. Have you ever seen Sammy Blue play with the guitar behind his back like he did at the Fish 'n Pig on Saturday night? You should. We all should.

Hug your unsung music heroes and hire one today. Macon needs to help sustain some of our veteran artists, and the best way to do this is by booking them for special events and private parties. If you’re interested, send me a Candygram at maconcandy@gmail.com, and I’ll put you in touch.

P.S. The pics aren't that great (since they came from the cell), but check out Bo Ponder at the Key Club and Sammy Blue at the Fish n' Pig!