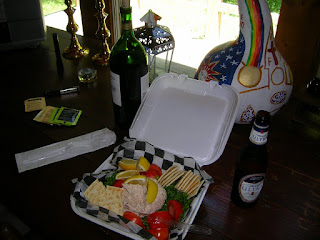 It was about time Mom and Shuga D made a break for it and headed to the hills. To continue decompressing from their post-Bragg Jam stressing, they booked a weekend at cousin Little Phil’s cabin, nestled in the incline between Dillard, Georgia and Highlands, North Carolina. Peace at last, they thoroughly enjoyed not having AC, TV, internet or even cell signal when up in the cabin.
It still didn’t keep them from staying busy. Saturday morning, they woke up early enough to eat breakfast family-style at the Dillard House. Since Mom spent many a trips there, she knew what to expect. She couldn’t help but laugh at the site of Shuga’s saucer-size eyes as their breakfast of mountain champions was laid out – bacon, eggs, two kinds of sausage, country friend chicken, ham, sausage gravy, red eye gravy, grits, apples, biscuits and I’m sure a few things I forgot as a I continue to lip my chops.
After breakfast, the stuffed lovebirds ventured to the Dillard Stables where Shuga D took Mom for a ride over the river and through the woods . . . as part of his anniversary present to her. It was a first for her to see Shuga in a saddle, and he and big Jake made quite a handsome pair. Their hour-long trail ride took their horses belly deep into the Little Tennessee River, one of four rivers in our country that flows north (according to their guide). They were both grinning from ear to ear as their horses splashed back and forth and kept everyone cool by “misting” them with their tails.
The only downside? We don’t have any room in Candy’s Land (yet) for the baby goat Mom could have brought back home. The good news is that room for a kid – as in the goat variety – is at the top of our family’s goals!

Since it was a weekend away, Mom’s going to keep it that way. But she was twitter-pated enough to Twitter when she got a cell signal in town. Check it out in the Twitter feed in the left column. Let’s just say Shuga is a man who ain’t afraid to ask for directions, and he does a darn good job following them . . . even if they include miles of dirt road, obsolete road markers and more than a few stop signs were you’re supposed to turn one way or the other. At the end of it all was the best watering hole – some shoals of the Chattooga just over the South Carolina line – and later a fruit stand with locally grown green apple goodness.
Mom also managed to pick up another mountain treat on the way back to the cabin, which is what you see here. She ordered some smoked trout spread to-go from a little restaurant near the base of their hill, where you can bring your own trout in for them to clean and cook. She figured it was best to be enjoyed on the screen porch of the cabin, with a couple of cold beers and an approaching sunset.

The weather could not have been better. In fact, it made them question if they were still in the South! It was barely 70-something during the day at the cabin, and the nights were cool enough for long sleeves. Sunday, they woke up to a chilly rain on the tin roof, where they spent the remainder of their vacation reading and listening music (and the rain, of course). If there ever was an appreciation of simple pleasures – this weekend was chocked full. Sometimes you just have to work hard to find them.
Posted by Jessica W at 5:30 PM