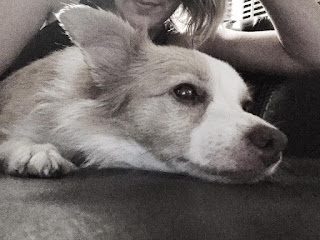 It's been a while since I posted a pic of this girl. Or any one of our five mutts, for that matter.

The truth is when baby boy arrived, our fur babies took a big backseat, just as everyone said they would. Life hasn't been the same. They don't have our doting like before. But they do have each other. And they even have their own rather nice "dog den" in our old guest house in the backyard.

Still, we feel guilty as we pass them everyday, swearing we'll get back to them soon enough.


Our baby boy loves them, pointing and laughing at his "Bark-Barks," even though we all know he makes them nervous and is the culprit for their new found neglect.

Candy Lou, in particular, was the princess of my lap (and the original inspiration of this blog!). She came to me via Heart of Georgia Humane Society, just a few weeks after the tragic passing of my beloved Guapo. Ironically, they called her Mama. She was surrendered to the old school Animal Control for getting pregnant on her first heat. She gave birth in foster care, and after her one puppy was adopted out, she ultimately found her way to us. So, she seems to get the mama thing more than any of them.

She's also an alpha among our pack. Her throne now sits at the top of our backdoor stairs, where she remains hopeful for an invitation to return inside and resume the life she had better than any of the other four. And she sits so patiently. She's watched me go in and out of the house in the fog of the newborn haze, the blissfulness of new babydom, the business mode of working motherhood and the concern that comes from keeping a curious toddler from getting hurt. And she sits and waits for whatever she can get these days, even if it's just a quick pat, acknowledging that's she there.

I can't promise Candy Lou that we'll get back to our "old life" together. And I don't know if she'll live long enough to see things truly settle down.

But one thing I can assure her and our other four is that they're not going anywhere. We can't give them all we gave them before, but we can give them the same loyalty they've given us. We're not the parents who turn our backs on our pets.

Sure, they are messy. They are unsure of the baby. They still bark too much. But they are quieter than they used to be, especially when we shush them and say "baby is sleeping." And when the baby does want to see the "Bark-Barks," we respect their space so our child can learn to respect it, too.

Tonight, Candy Lou's waiting didn't go unnoticed. She was bathed, she was cuddled and she was reminded she was still loved. It was just enough, so that when it was time for bed, she quickly went back to the pack, settling down for the night in their den outside our backdoor.

The fact is, we're all part of the pack - me, Jamie, Walden and the five mutts (Candy Lou, Boz Waggs, Tybee, Bowen and Miss Kitty). They miss living with the ultimate alphas, but they know the newest cub needs us more right now.

And even though the attention they get from us may never be the same, before we all know it, their love will triple as our son comes to know them like we always will. A baby, indeed, changes everything ... Including making that love and loyalty only grow.
Posted by Jessica W at 11:05 PM