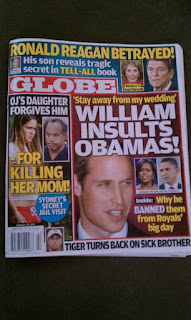 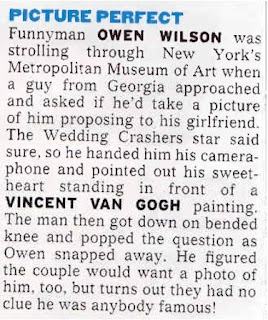 By now, you've probably heard the proposal story. We were visiting the Metropolitan Museum of Art, when Jamie noticed Owen Wilson was also there, doing the same thing. He approached Owen and asked him to be a part of our proposal - all Owen was to do was take the picture of the very moment. Owen agreed. And you can only imagine my shock when Jamie and Owen entered the gallery where I was taking in the French Impressionists and walked me over to the Seurat study of "A Sunday Afternoon on the Island of La Grande Jatte." It was there that Jamie said, "Jessica Walden, in front of Owen Wilson and Seurat, will you marry me?" And Owen took out our camera and took the photo you see here on the site.

So imagine our utter shock and awe the next day as we turned on the television in our hotel room and watched Owen Wilson re-tell the entire story on "Live with Regis and Kelly." Not only did Jamie's proposal get props for being "pretty smooth," but there were all kinds of "awwws" from the audience and Kelly, which made it even sweeter.

From there, Owen's audio clip was "skimmed" and circulated on Cumulus radio stations across the country. Many of our friends heard it on their morning commute and let us know. And I guess it was from there, that the Globe tabloid got wind of the story.

That's right, the Globe. Thank goodness for friend Tabitha Walker whose mother has a penchant for supermarket tabloids. She brought us a copy of the issue that we can now add proudly to our scrapbook.

Be careful what you read, folks - the tabloids really don't get all of the story right . . . But they sure do make it a lot of fun.