When a Man Loves a Woman 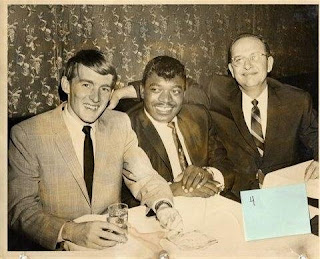 Especially his daughter . . . He'll trade the world, spend his very last dime and give her everything he has. Thank you, Mom's Pop Walden, for marking another year as a wonderful father. We're a little late with the birthday wish, but after 67 years . . . who's counting?
Pictured is recent birthday (May 23) boy Alan Walden with Jack Chisom and the ultimate balladeer Percy Sledge, who remains romancing couples everywhere as he tours today. The picture was taken the week "When a Man Loves a Woman" reached number one in Billboard. It was also taken at a party where Mom's Pop met a then-unknown guitarist named Jimi Hendrix and could have mistaken him for Johnny Jenkins!
There's a whole lot of living and legends wrapped up in those 67 years. Candy Lou loves and celebrates you!
Posted by Jessica W at 3:33 PM