When the Shift Hits the Fan

This isn’t the first time many of us have lived the shift.

I was hardly one year into my career when September 11, 2001 happened. We all remember that moment of slow motion – when the news of a plane hit, then another, and another, and another. We never forget the ground we were standing upon when those two towers tumbled, footed by news tickers releasing reports from the Pentagon and that Pennsylvania field, too. We will always feel that shock, awe, impact and lingering aftermath. From that moment forward, we weren’t living in the same world we had woken up to.

Just turning 24 and as entry level in crisis management as it comes, this time in history was my crash course. In less than two hours after the tri-fold of tragedies, we were set to host a free community concert at the Georgia Music Hall of Fame, kicking off a big week of the fifth anniversary. The tent was up in the parking lot. It was my job to help set out tables and chairs. The band was arriving. Lisa Love, my first boss and continued mentor, had a tough call to make.

So, she did. The show would go on. I remember her very words, ones I have repeated many times over the course of my career since:

“Music has the power to heal,” she said. “Now is no better time for community.”

From there, that afternoon, as people gathered under that tent and took a moment of silence, then tapped their foot and even danced, we found ourselves in the midst of a moment in time, where deep down, we knew: this was the last of what we knew.

Soon, the shift hit the fan. The FAA paused the world when flights were grounded. Travel as we knew it changed. Liquids, carry-ons, shoes and socks in the airport would never be the same. Flight patterns were permanently altered. Patriotism and mistrust surged. Religion and religious discrimination were resurrected. We formed new allies and formally declared enemies. We feared elevators, high-rise buildings, large crowds and each other. Side-eye to the stranger next to you became acceptable. Maybe just maybe, he or she was an air marshal.

Priorities shifted. Media consumption shifted. War stories shifted. Tensions shifted. Culture shifted. Lives were lost. Life was lost. But to honor the dead and recognize the living, life as we knew it had to be rebuilt.

In the hours, days and weeks after 9/11, attendance at the Georgia Music Hall of Fame plummeted. We postponed the week’s culminating concert headlined by the B-52s. And when it did finally happen, months later, there would be no kick-off Air Force Fly-over or near the crowd we expected.

But something else happened in the shift. Local travel became a thing. Suddenly, attendance surged from within Georgia. People wanted to be closer to home, but they also wanted to roam within range. Exploring Georgia with a one-tank trip was now the way to go. And our POS system at the Music Hall pinged with local travelers and their inter-state zip codes.

No, the local travel trend wasn’t enough to save the Georgia Music Hall of Fame, but it did postpone its inevitable closure for a few more years. And for Georgia as a whole, it worked. From post-9/11 through even today, tourism became one of the State’s largest and most successful economic engines, Georgia grown, from the inside out.

That September day would shape us in many profound, obvious and subtle ways. It was painful. It was traumatic. It was resonating. It was yesterday, yet it was also a lifetime ago.

Shifts happen. Remember the Flood of 1994 here in Macon? I was only 16 but a shift happened during that time, too. I’ve never forgotten how much water it takes to flush a toilet. That summer was the slowest, most inconvenient time of my young life – showering in a golf club locker room, hauling plastic gallons of water from Red Cross trucks, not being able to wash off the evidence of mud-bogging in my dad’s Toyota 4-Runner. But it shaped me, never leaving me and prepping me for future first world problems.

I recalled the Flood just yesterday, with the lengths I am now going to in sanitizing my groceries. Many of us already swear we’ll never take germs for granted again!

My son is almost six, and I know each and everyday in isolation are imprinting his life. He’ll remember this time as one where he and his mama stayed up later than we should, giving thanks and indulging in cartons of ice cream I wiped down with Lysol AND rubbing alcohol.

He’ll remember this time for a long time, every time he washes his hands. He’ll forever hear it in our hand-washing song: “Jolene, Jolene, Jolene, JO-Leeeeene” three times, together.

If you lived 9/11, then you know right now, the shift is hitting the fan. It’s happening. But we can’t know what will stick and what is fleeting. We’re still in the fog of the present. Then, there  will be the bog of aftermath. Still, seek the shifts, even when we know darn well that only time will tell. What will alter culture forever? What will we embrace like a new dawn? 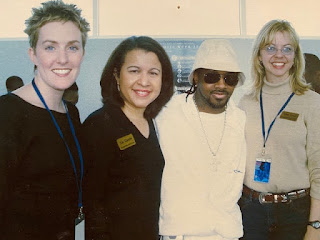 Here are some throwback pics to my early career at the Georgia Music Hall of Fame, post-9/11. Above are me, Liz Garcia, Jermaine Dupri and Lisa Love. Below features me with Keni Thomas and members of his band Cornbread. 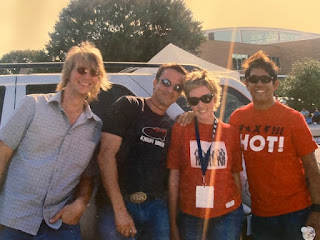