RINGing in the New Year! 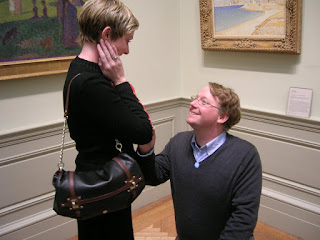 It's been a few weeks now and the excitement has yet to wear off. Mom and Shuga D were at the Cox Capitol Theatre this week for the Dead Confederate concert. When Mom went to order her drink, the man behind the bar gave her a wink. "This one is on me," he said, "Because you have the best engagement story ever." We'll toast to that!

So, for those not sick of hearing the story, here's another round on us, from Candy's point of view . . .

Shuga and Mom took on the Big Apple. Then Shuga took Mom by surprise. And he took a certain movie star with him.

It all began with their whirlwind trip in the middle of the week to kick off Shuga's birthday month, which also falls in the Christmas season. They checked into the Upper West Side's Hotel Belleclaire, a boutique hotel with one of the best room views Mom had ever seen in NYC. Not only was it well-appointed and ultra-clean, it had yet to make the bed bug registry, which was also a big part of the big city appeal. Within a few blocks was John Lennon's famed Dakota. It was also the anniversary of his untimely death. Within a short walking distance from that was Central Park's Strawberry Fields, the first stop on Mom and Shuga's chilly trip.

Bundled up and arm-in-arm, they wound their way through Central Park. They overviewed the city from a beautiful bridge, stopped for drinks and duck confit at the Boathouse and finally found Alice and her tea party on their stroll across NYC's nature to the Upper East Side. Still, unbeknownst to Mom, Shuga had something in his coat pocket. And even though it was ultra-romantic, the moment wasn't quite right.

From there they enjoyed jacked-up hot chocolate at Dylan's Candy Bar, window-shopped along Madison Avenue and eventually wandered their way into Tiffany's. "What floor?" the elevator ambassador asked.

"Will it freak you out if we look at rings?" Mom asked Shuga.

"Not at all," he answered, patting his coat pocket.

And up they went to the second floor. Mom bypassed the engagement rings and went straight for the wedding bands. When she and Shuga found something they liked, the saleslady asked her ring size. Mom couldn't remember.

From Tiffany's it was on the subway to Times Square for a quick moment of awe. Then it was back on the subway to the Upper West Side for a dinner date with an old family friend . . . who Mom had never met.

Prohibition was the perfect, local-like wining and dining watering hole. It was there they met Robin Duner-Fenter, a New Yorker by way of an interesting upbringing in Macon. Rob's step-father Frank Fenter, was one of the founding fathers of Capricorn Records, and Mom's uncle Phil's business partner. His mother was Baroness Ulla von Blixen-Finecke, "Kiki" for short. Rob and Mom bonded quickly. Just when she thought her family history couldn't be more historic, she meets more . . . The other side of the fabled nonfiction that brought true international flair to her fair hometown. The three of them talked family business until the middle of the night (and the next morning). For Mom, it was like a homecoming in a city not her own.

The next day has since been officially declared Mom's "Best Day of the Decade." It started with the Manhatten Diner and Mom's favorite, absolutely favorite, food - a classic NYC bagel and Lox. From their breakfast of champions, they made their stroll across Central Park once more, on their way to the Metropolitan Museum of Art. And it was from there that everything changed forever.

They had been at the Met for almost an hour, overwhelming themselves with their choices of exhibits. Shuga suggested the French Impressionist on the next floor. As they made their way to the gallery, they passed a familiar face and unmistakable profile. It was the actor Owen Wilson. While it was pretty darn cool, they were also in the presence of Van Gogh . . . and Monet, Renoir, Manet, Degas and Seurat. Oh, Seurat. Mom immediately swooned when she saw one of his original studies of "A Sunday Afternoon on the Island of La Grande Jette." Not only does it remind her of a Second Sunday Brunch in Washington Park, but it's just one of those paintings she's paid attention to over the years of art history she's studied here and abroad.

While Mom continued to ohh and ahh over the famous works that surrounded her, Shuga slyly disappeared. When he returned to the gallery, Owen Wilson was closely behind him. Mom was confused. They looked up to something. And when Shuga took Mom by the hand and led her back to the Seurat study, she couldn't help but wonder (a la Carrie Bradshaw), why is Owen Wilson following me?

But soon she was distracted. Because Shuga D was on a bended knee. In his hands was a ring of all rings . . . one that hadn't had a chance to sparkle like it did under those museum lights for many, many years.

"Jessica Walden, in front of Seurat and Owen Wilson, will you marry me?"

And with that, Owen Wilson took out the couple's camera and snapped the most picture perfect picture of the very moment that dreams are made of.

In case you are wondering, Mom said yes. It was shortly followed by, "I need to sit down. I feel as if I am going to faint."

Owen Wilson wasn't the only one who witnessed the big moment. Even the security and gallery-goers enjoyed being a part of the special moment. Mom will never forget the one lady who came up to them soon after and said, "That right there was a New York moment. And I am from New York, and I can tell ya, that was a New York moment. Congratulations you two and happy holidays!"

From there, they ordered two glasses of the finest champagne the Metropolitan Museum of Art offered . . . and they drank it all in.

After finally leaving the Met, it was a cab ride to DB Bistro Moderne, recommended by former Maconite Kelly Kramer, now a bonafide New Yorker/aficionado. Of course, Shuga told everyone that he had just popped the question. And it led to more champagne being popped, followed by an elegant three-course meal with the best rice pudding Mom will ever remember (she was so excited, she had a hard time eating up until dessert!).

And then it was on to the spirit of Christmas in New York. Mom out-blinged the Rockefellar Christmas Tree. She glowed like Rudolph and loved her ice far more than the skaters ice skating before her.

She and Shuga took in their hot toddies before the Radio City Christmas Spectacular and felt like they were the only ones in the world, despite the hundreds around them. And then it was show time, where Mom maintained a big ol' grin through every Rockette number. By the time the show ended with the moving living manger scene, Mom was so overcome with gratitude and just sheer joy that she practically rose from her seat and went to church as she sang, "Let Heaven and nature sing," with happy tears streaming down her face.

The newly engaged Mom and Shuga ended their day at the Top of the Rock, on top of the world, taking in the city that will forever hold one of the most sentimental pieces of their hearts.

You would think the magic would end there, but it didn't. The next day, awashed in their new engagement and preparing to pack for check-out, the thought occurred to them to turn on the television and see what Owen Wilson might be up to -- It just so happened to be "Live with Regis and Kelly."

On national television, before a live studio audience, Owen recounted the story about a "sweet couple from Georgia" and his participation in the proposal. Kelly awwed. The audience awwed. And Owen added that Shuga's move, "was pretty smooth."

Mom and Shuga sat in shock. This was them! This is their story! The one that they will tell their children's children. And hopefully those children will share it with their own. It was the proposal story heard around the world. But it is their love story that they will hold deep in their hearts, forever. And whether Owen Wilson knows it or not, he's now a part of their history, along with Seurat, for as long as that story will be told.

Happy new year everyone! A wedding is coming to Candy's Land!