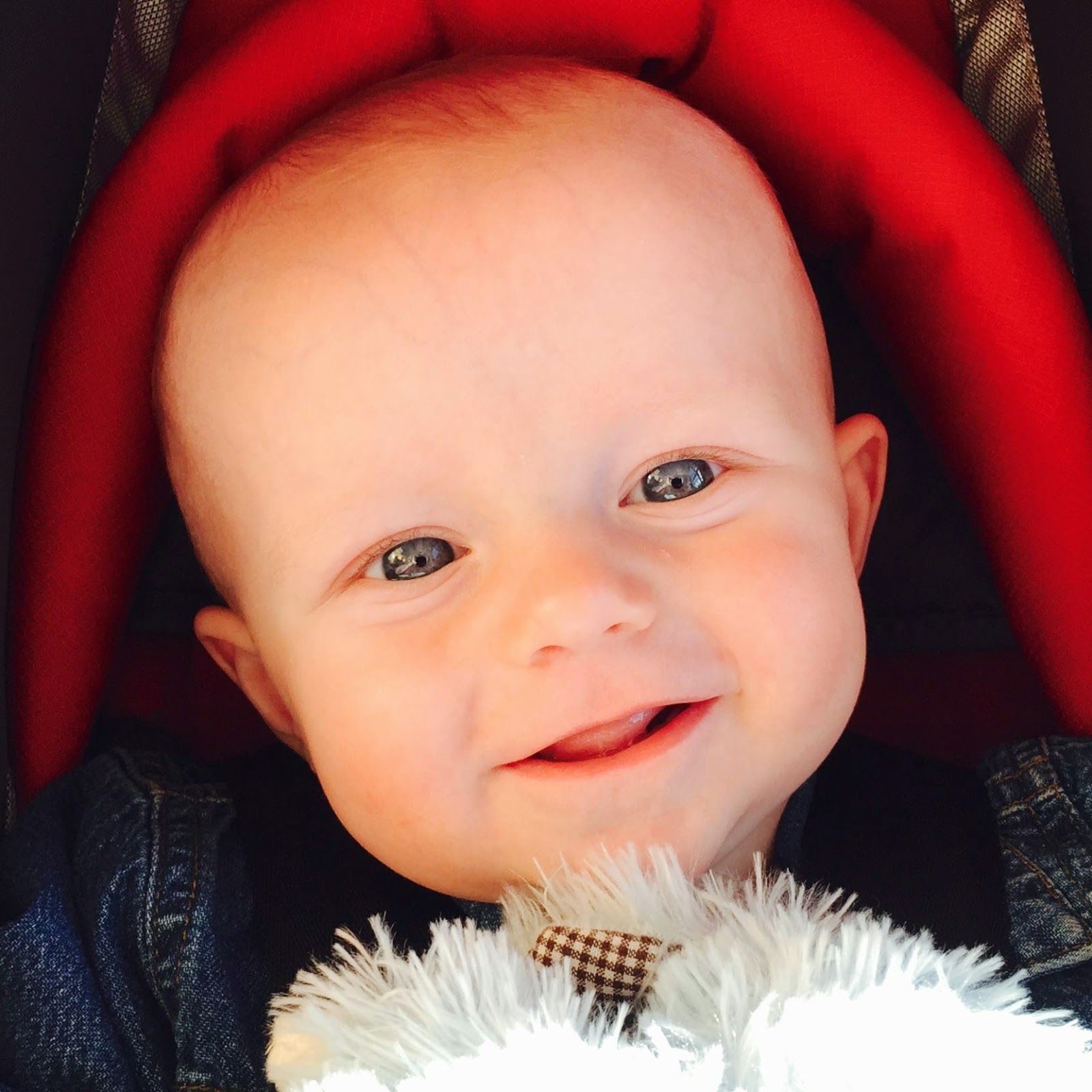 This week, Walden and I took a stroll in Downtown Macon with our friend Lauren Morrill Ragusea and her 11-week old little boy Freddie, who by the way, has the most luxe head of dark hair I've ever seen. One of the most exciting things to happen in Downtown in 2014 was the opening of a local grocery store, Ocmulgee Traders. After a hearty stroll around our downtown blocks, we stopped by the grocery to grab King of Pops popsicles (yes, in December, when you can still break a sweat!). We just happened to run into photographer Maryann Bates and her beautiful family enjoying an afternoon snack as well.

I count as my blessings to live in a town where it's not hard to run into dear friends. And Walden is starting to realize that too. He lit up with recognition the moment he saw Maryann, who always makes him smile. And of course, she had a camera on her. She sent me this warm and fuzzy photo that evening. I couldn't quit staring at my beaming boy, who turned six months old this week.

Six.months.old. How have we been up to this for half of a year? Where did these six months go?

It went into two nervous, unsure new parents wondering why the hospital would make us leave in just two days and take him home with us . . . without an instruction manual. It went into that first week of being absolutely terrified of the umbilical stump, his circ-wounded manhood, his wobbly little head and his tiny little everything. It went into eight weeks of him sleeping in a Mamaroo because he would actually sleep when he was in it. He would sleep so much that I wouldn't sleep because I was too busy jumping out of bed and making sure he was still breathing.

It went into only four weeks of maternity leave, something I regret. Granted, I was doctor-ordered off my feet almost two weeks before his arrival (and still managed to coordinate a press conference from my living room easy chair) and worked four weeks from home after the initial four were up, but the regret is even eight wasn't enough. I didn't realize how much shock and awe I would be in physically and emotionally after having a baby. Looking back, I should had gone completely off the clock and radar longer. Heck, my sun-don't-shine stitches weren't even gone by the time I was working again. This country's maternity leave practices just ain't right. The glass ceiling will never be cracked when our careers treat child-bearing like a professional set-back. I wasn't willing to take a $15,000 pay cut to be home with my newborn for the first three months of life. Seriously, we're all worth way more than that.

It went into six weeks when that million-dollar more-than-a-million smile emerged. So many people tried to warn me - that first smile will wreck you in the best way possible. And so it did. When his first smile emerged - that little window to the purest heart you'll ever know - my soul broke into a million little pieces and were woven back together in a way that would have me do just about anything to see it over and over again. Since that six-week milestone, Jameson Walden Weatherford has melted many hearts with that smile. As you can see by this photo, he's mastered the technique.

It went into three months when we stood alongside our family, our friends, our congregation and our God to baptize our child in our Christian faith. It was the same altar at Mulberry Street United Methodist Church where Walden's father and great-grandfather were also Christened. Walden wore his Uncle Preston's Christening gown, the hem now sewn with his name and date along with Preston's. It was a holy moment for us all, even though Walden required our minister to anoint him with his bottle after the sprinkling.

It was just a few days later we made the bold move to take our first family beach trip. It went into a six-hour drive being broken into three-hour-legs, over two days, divided by 1.5 hour pit stops. The drive down ended with the longest last 12 miles we've ever faced, where the Prius was nearly empty; we were stuck in Tampa rush hour; it was pouring rain; and the baby rendered his diaper useless with one massive natural disaster. His first venture to the beach startled him so bad, I had to nurse him the entire time (and publicly my first time). It rained for most of the trip. And my bucket list item, the Weeki Wachee Mermaid Show, was cancelled due to lightening after we got there. But that's just the lowlights. Our first trip as a family of three was unforgettable. We spent my birthday at Silas Dents, my favorite campy steak and seafood restaurant of beach trips gone by, and the baby slept the entire time, giving us a perfect meal. We eventually dipped Walden's toes into the Gulf of Mexico. And there was this Best Western in Valdosta, Georgia, where we stayed in the middle of our drive, that was simply perfect. I'm neurotic when it comes to highway hotels. But I totally clicked with this Best Western. In fact, I say our next trip, we just drive there.

It went into four months when we decided we just weren't ready for daycare. Especially during the RSV season. Breathing treatments every four hours and seeing our baby sick for the first time wasn't for sissies - especially us first-timers. I broke into those million little pieces again. His daddy did, too. The boy in the bubble was out of the question. But in the stress of this, a new, unlikely superhero emerged. My stepmom Tosha, now better known as Walden's Amma, swooped in and saved the day by giving her grandson the best daytime care possible. He hasn't been sick since [*I'm gonna knock, knock, knock on wood*].

It went into five months where we entered the throes of teething and just when we thought we had the best sleeping baby in under the night sky, the deck got re-shuffled. We're still trying to figure out what to do with this new wild card that tends to come out between the AM hours of 12, 3 and 5:45. But the teething pain seems to have temporarily subsided, even though the home-wreckers haven't broken through the gums yet.

It's been six months, and we have a real live human on our hands. His totally joyful personality has emerged. He's babbling and motor-boating and grunting and trying with all his might to crawl. He loves to reach for certain things throughout the house -- the stained glass window in our stairway, the globe in his bedroom, paintings on our walls, the light switch in our hall. His sense of discovery is my sense of discovery, too. I'm seeing the world through an entirely new, glorious (and sometimes terrifying!) perspective. He's starting to taste foods - a little quinoa cereal, a little sweet potato, a little avocado, a little banana today. He still prefers mama's milk, and Elsie's still got nothing on me, so we're sticking with breastfeeding for another six months or so.

Six months in and he still doesn't like to nap. His dad says he gets his stubbornness from me. I say his daddy's so stubborn he won't admit his son gets it from him. Still, we're all so stubborn, we continue trying to make a nap schedule work even though I spent an hour and 40 minutes today trying to get him down for a morning nap, and when he finally did, it lasted 18 minutes. Six months in and we're still waffling between his nursery and our bedroom. He still has dual-residency. And mama is fine, for now, with that.

Never in a million years.

Time flies when you're having fun. And the last six months have blown by. It's obvious how our little being has changed so much over this half of year. When I take the time to look, I see how much I have changed and continue to change with him. No doubt the next six months will fly by just as fast. All I need is my son's smile for my soul to sing for more, more, more. 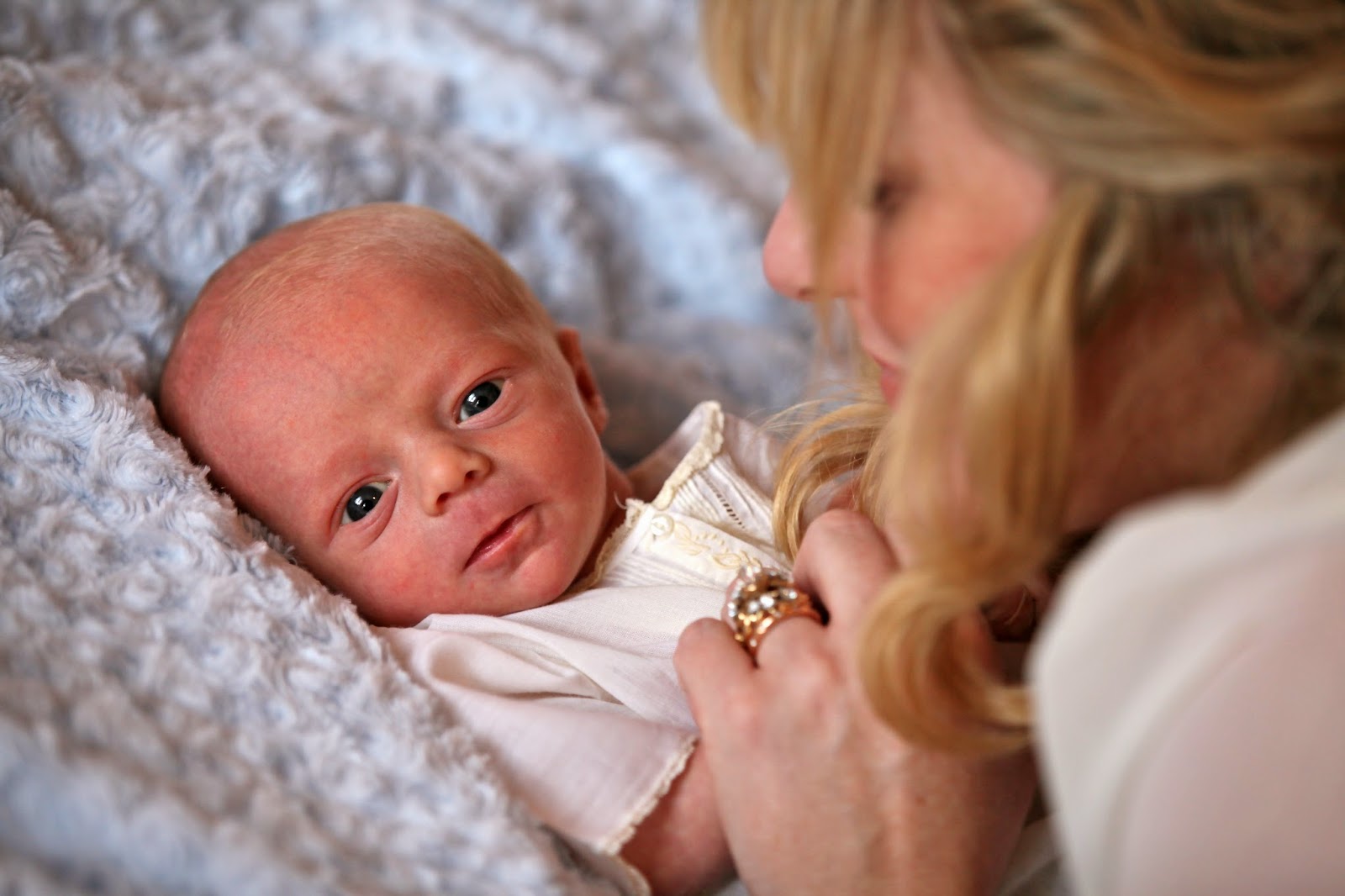