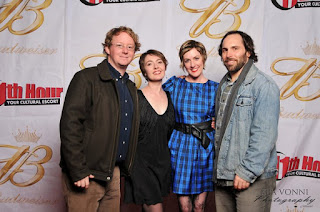 Since this "concert with a wedding wedged in" is far from traditional, we've kept things simple on stage with us during the ceremony.

David Higdon was not only with us on our two "first dates," which included getting pedicures together, followed by a pretty awesome Tom Petty & the Heartbreakers show a few weeks later, but we've been hanging out and working on community projects like Bragg Jam and Second Sunday concerts ever since. He'll be standing in as Jamie's Best Man, even if Jessica considers him just as much one of her best men in her life, too.

Sarah Gerwig-Moore and Jessica haven't been best of friends very long, as far as longtime friend standards go, but in the few short years that they have tightly bonded, they've made up for the life they lived without each other. She's been with us from the beginning and has remained one of the best confidantes, supporter and cheerleader for both of us along the way. Jessica and Sarah are often asked if they are sisters, and they have also been easily confused as each other. Even though they are far from one of the same, they make a kick-butt team. Jessica is proud to have Sarah as her Maid of Honor.

Brooke Weatherford Kinross couldn't be a better big sister. From the early days when she would put her little brother in the car and crank up the Indigo Girls to the many concerts they attended together, Brooke showed Jamie what real music was made of and they both share an undeniable close-knit bond as brother and sister. We love having Brooke back in Macon, along with her beautiful family - husband Steve and our nephew Jackson James and niece Olive Jean. Brooke will stand by her brother on the big day.

Brad Evans was Jessica's publisher when she went to work for him and his wife with their newspaper The Eleventh Hour. At some point along the way, Brad Evans became the big brother Jessica never had. When it comes to having someone's back, Brad's got Jessica's like a grizzly bear (and Jessica has his like a mama bear). Brad is the one who told Jessica to give Jamie a chance, saying he would never suggest such a thing if he didn't think it was a good thing for her. And boy was he right. He even played wingman during the early days, when Jessica was too nervous to be around Jamie, who, as Brad so eloquently put, "Came on strong like a Wal-Greens cologne." Brad will be standing by Jessica, this time as her "Bradsmaid."

Pictured are the Maid of Honor and Best Man with Jessica and Jamie at the Eleventh Hour's "Readers' Choice Awards" in 2010.
Posted by Jessica W at 6:32 PM